We might have lost count of how many roles Sudipta’s has had during her time at Groupon, but we haven’t forgotten she’s one of our favorite internal mobility stories! See where Sudipta’s Engineering journey has taken her since joining Groupon as a college grad! #GrowAtGroupon

Tell us about your job! What do you do exactly?

I am a Software Engineer and I work on the backend team in Ads Engineering. This platform enables the Groupon Merchants to run paid promotions to increase the visibility and conversion rate of their deals. I enjoy seeing the direct impact of the service to Groupon's overall growth.

What do you love about it?

I love the fact that we own these services from Bangalore and are responsible for everything associated with them. There is not only high visibility but also recognition for all our efforts. In pre-covid days, other than office work, I loved the fact that we also worked on a lot of fun activities such as festivals, birthday cake cuttings, company-wide outings, and intra-company sports competition, personal development courses, and volunteering opportunities. Ever since covid hit us a year and half back, things have certainly taken a backseat, but, we have also adapted to a new virtual world, and do engage in activities like attending to health sessions, hackathons, festival celebrations, welcoming new joiners, leadership talks etc.

What do your parents think you do?

Well, my Mom was convinced that we provide the best deals ever – not for the love of anything but onions! So onion prices in India once jumped about 90 percent last year to $0.86 a kilogram up from about $0.46 a kilogram. Groupon India had launched an “onion deal” in September that became so popular that it actually crashed the site! Nearly 3000 kgs of onions were sold in 44 minutes, 30 minutes of which the site was down due to the highest traffic ever!

What was your first role here? How did you get to where you are now?

I was recruited during my final year of post-graduation and was hired for the Goods team. We worked on a logistics service, built on Python-based Django framework and used Postgres backend. It was responsible for vendor payments, once the product was actually shipped to the end user. After 11 months, I was a part of the Goods sub-teams written in Ruby and Angular JS resp., using MySQL backend. While one of the services was responsible for storing and validating vendor contact details along with deal information, the other service provided a platform for the vendors to put their deal information on the portal which would allow the Groupon buyers and vendors to eventually sign the contract.

Eight months later, I started working on a few platform services around APAC initiatives. The following year, I worked with the Global Marketing team for about three months. I then headed towards a new venture, this time on the front-end technology with Conversions Engineering, whose services were built in NodeJs, using Mustache for HTML templates, and beautified with CSS. I was primarily involved with enabling users to log in and sign up when either on Groupon or when integrated via social communities such as Facebook and Google.

After being part of this i-tier framework-based front-end project for around 10 months, in January 2017, I moved back to platform services and became a member of the Push Engineering Team. After working on the Marketing Team for next 3.5 yrs, and Delivery pipeline, for another 6 months, I moved to Ads Platform in March 2021.

In the past almost 8 years, I have seen a standardisation from raising pull requests over emails, logging tickets in Pivotal tracker, maintaining a code repository on Github, filing tickets in Jira, using test rails for QA steps, and introducing a review process for new services.

There are various forums that practice technical discussions, workshops, and hands-on sessions. Engineers working on different teams reach out to each other when they’re stuck on any design problem. As my manager said once, individual contributors here get the opportunity to work in every role. Like in the temporary absence of a Product team, Engineers can become a Product Manager and work closely with the business team in getting the right expectations.

Engineers here strive to keep the coding standards high and follow best practises framed in various guidelines. We have strict review processes for new services, which require a document explaining the challenges the service will solve; the logical and physical design; upstream and downstream dependencies; availability constraints (Tiers); what data flows in and out of the service; and the deployment process.

Every quarter, there are processes carried out to ensure every microservice is confined to its expected SLA and is stress tested to assure it’s capable of serving 2-3x more traffic during holidays. We also have global hackathons arranged each year. There is a creative energy all over, where colleagues come up with many impressive ideas, and some even implement them within the designated time span. While all these might look like very usual stories, I would like to share one unique experience from such events. It was the year 2015, where the winning project contestants from Chennai actually got the opportunity to present their team idea in Seattle in front of the CEO. It was a highly motivating experience!

What’s your favorite view from the office? 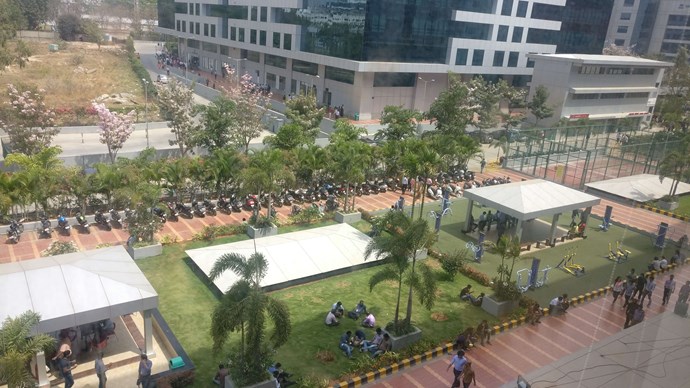 What’s the most challenging thing you’ve worked on?

Although I have moved across many teams in the last almost five years, the journey has been continually challenging and I have learnt a lot from it. Out of the many challenges, I would like to talk about one particular instance. It was the time when my journey switched gears from back-end to front-end service when I responsible for providing login/signup sessions to all customers. Switching from Java to NodeJs (Javascript), HTML and CSS was definitely challenging. Playing around with CSS, which provides visual and aural layout was the most challenging part. It was then that my respect for the UX developers grew by leaps and bounds!

So, a few years back, when I was still deciding if I should accept the challenge of working in front-end technology after having worked only in the back-end, my director explained to me that it is always good to take one step further towards being a full-stack developer. Today, when I look back, I realise it was definitely good advice and it makes me feel happy to have accepted the challenge!

What’s been surprising about working here?

Groupon expands via acquisition of companies, which in turn brings new tech stacks. While there are companies that force their acquired companies to rebuild after an acquisition closes, Groupon does not. What it leaves behind is a challenge to build an ecosystem around these services so that they operate smoothly with each other. Groupon’s North American platform was originally a single, monolithic Ruby-on-Rails application, known as the Primary Web App or PWA. The other platform i.e Berlin/CityDeal is a collection of Java applications that mainly use Spring. These platforms are evolving towards a consistent, global platform termed ‘One Platform’. The global platform is a service-oriented architecture (SOA). The effort of bringing all these services based out of different technologies onto a single platform has been enormous.

One of my favourite memories with Groupon dates back to March of 2013. At that time, I was studying in Pune and hadn’t started working here yet. Groupon had organised a get together for fresh hires in the city of Nawabs, Hyderabad. I still remember how the conference room was filled with curious minds who were preparing to get started on their career journeys and how eager the senior directors and HR were to welcome their young employees aboard. Not only did Groupon fly us down and back and provided a comfortable stay, but the entire event gave us the feeling about how much this organisation cares about its employees!

Vim, simply for the ease it provides to carry out basic required operations.

What has been your proudest moment so far at Groupon?

It was in Q1 2019 when our backend team got a business critical requirement to determine promotion eligibility of a Customer. It had to be performed on a massive scale of around 60K requests/min, and under p99 latency of 20 ms. I was very lucky to get the opportunity to implement the solution under the guidance of a senior colleague, and my then manager. After trying various solutions, we finally cracked it using Reactive Principles using Play, Akka Actor Model in concert with modern day NoSQL stores like Redis and Cassandra. We presented an abstract paper titled, Extreme low latency microservices operations in the e-commerce domain using Reactive Principles to Grace Hopper Conference India (GHCI) and even won the competition to present the same. For me, it has been the proudest moment to represent Groupon to different cohorts of techies coming from all over the country.

What do you do to relax?

On top of absolutely crushing her day job as a Software Engineer, Sarah was recognized as a “Culture Champion”, and it’s easy to see why! Read more about her work on the Cloud Routing team, and what she’s gained since joining #TeamGroupon!

Kumar is the perfect example of why Groupon’s leadership stands out amongst other big tech companies. Learn about how he grew the India development center from its inception and continues to empower Groupon’s millions of customers...

Learn all about Nisha’s engineering adventures at Groupon Dublin and where her knack for crocheting stemmed from. #WomenInTech