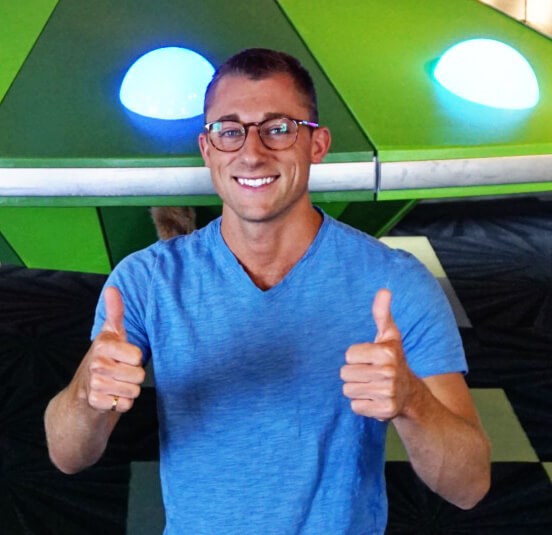 Dom’s dream is to have 15 minutes of fame, but we’re pretty sure he’s already accomplished that with his cameo in a Groupon video for….a facial fitness muscle training device?

What do you love about your job?

I love working with franchise brands. These brands are generally well known but want to increase customers’ purchase frequency. Or they want to reach new customers who haven’t tried out the brand yet. I’ve worked with several major franchises that Groupon hasn’t pursued in the past. We’ve seen tons of success for the businesses and the customers love buying them, too. I’m motivated to work with a business that I know our customers are going to love and buy.

What was your first impression of Groupon?

“A cat spaceship in the lobby…unlimited LaCroix…and awesome coworkers. A job doesn’t get better than this.”

Why did you join Pride? What do you get out of it? Any notable highlights or memories?
I recently join Pride as of March 2018 so I’m fairly new to the team. As someone who is gay, I originally inquired about joining simply to meet like-minded people at Groupon and make a meaningful contribution to our workplace, but quickly realized after accepting the Market Place Chair position that it was so much more than that. I’ve been able to collaborate on projects that not only make Groupon a great place to work but also engage our subscribers as well. I think the most notable highlight I’ve had thus far is actually being pushed outside of my daily role at Groupon in Business Development, and working on projects/topics I hadn’t had exposure to in the past. So far it’s been a tremendous learning experience that’s not only challenging but fun!

Why is it important for Groupon to champion and support Pride@Groupon?

Have you ever worked for a company that accepts, champions, and supports the LGBTQ+ community before? How do you feel about it?

Groupon was actually my first full-time job out of college. I had a few small part-time jobs during school but Groupon is the bulk of my career experience. I think working for Groupon, who does support their LGBTQ+ employees, really marks the progress that’s been made for our rights over the last several decades. I think working for Groupon as my first job has set a great precedent for where ever my career takes me in the future.

The answer that comes to mind straight away is the people! We have employees representing nearly every branch of the company coming together because they believe Pride@Groupon can make a difference in our workplace culture and company in general. One thing we do that is separate from other ERG’s at Groupon is marching in the Pride Parades in Seattle and Chicago. It makes me Proud to know my company supports us to celebrate the work that has been done in the past for LGBTQ+ rights, as well as the call to action for more progress to be made. Groupon shows that not only by the sponsorship to be in the Parade but also the hard work that goes into organizing it.

How are you celebrating Pride Month personally? Professionally?

This will be my first Pride Month / Parade I’ve attended so this will be both my personal and professional celebration! I’m really looking forward to seeing our hard work or “fruits of our labor” come to fruition!

Who are some notable figures (historical or otherwise) you’d like to recognize for Pride Month?

When I was growing up sports and music were a big part of my early teens. I really enjoyed upbeat pop and dance music because it would really pump me up for a big swim meet or event. The biggest artist coming on to the scene at that time was Lady Gaga. I hadn’t been exposed to artists or celebrities who, quite literally, sang and wrote songs about gay rights. Lady Gaga’s song, Born This Way, that came out in 2011 resonated with me at a time when I came to terms with my own sexuality. She’s been more than an artist making great music and a style icon, but a champion by using her celebrity and status to advocate for gay rights, and popularize self-love and acceptance. She’s a notable figure in my life and someone who’s made a great change for the community as a whole.

Uncapped potential inspires me. Groupon gives you the tools to perform and there’s no cap on the amount of money you can make. I’m motivated to work with a business that I know our customers are going to love and buy.

I got to do a promotional video for Groupon’s social media. In the video, I had to intensely use a facial fitness muscle training device, then play tug of war with a dog toy in my mouth.

Long story short, dogs are camera shy and don’t play tug of war on command. The video was still hilarious. Check it out on Groupon’s Instagram account.

What do your parents think you do?

They think I can work with any business and constantly ask if “so and so” is running a Groupon.

Are you involved with any of the organizations in Groupon?

I joined the SPARK Mentor program earlier this year. It pairs individuals in the work force with a middle school student going to school in an in-need community. Spark’s mission is to inspire kids to continue their education My first job when I was 16 was working with kids teaching swim lessons. Encouragement goes a long way coming from an adult to a kid, and this program was a cool way to do that.

If you could do another job for a day, what would it be?

I would definitely be a pop star and perform in an arena for a day. I would do it for 15 minutes of fame for fans to scream my name, then I’d go back to normal life!

What makes Groupon such a special place to work? All of the people you'll meet here!

Reuben and cats don’t bode well together, so how has he fared at a company with a slightly-odd obsession with felines? (Hint: really well!)

Keep an eye on Luke, one of Groupon’s rising stars in the field (and yes, we do mean both sales and football!)

If there are two things Paige is passionate about, it’s competition and dogs. Lots and lots of dogs.