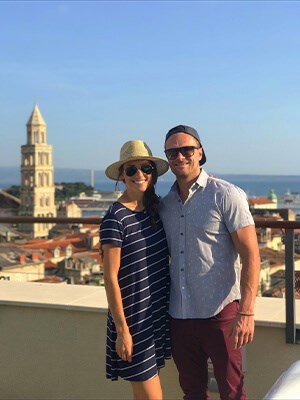 Dave credits his drive and his passion for empowering others to (spoiler alert) his mom. We’re not crying, you’re crying.

What do you love most about your role?

There are so many things to love about Groupon and my role. I love knowing that we’re building something really special here in the Scottsdale office. More importantly, above anything else, I love surrounding myself with people I can motivate AND people who motivate me. I get to work every day with some of the most talented and hardworking people I have ever met. We value not only driving production and results, but having as much fun as possible while doing it.

What do you do for Groupon?

I am a Regional Sales Director and Site Director for the Scottsdale office. I lead a team of managers and salespeople to introduce local companies to the Groupon platform. Having been both a salesperson and a manager means that I understand the unique challenges and priorities within each role. That knowledge helps me understand how the decisions I make impact the Scottsdale office.

My mom is my number one inspiration. Through hard work and positivity, my mom showed me at a very young age that we’re capable of far more than even we think we are. As a single parent, my mom completely switched careers, changing from occupational therapy to sales & marketing. While carving her new path in sales, she took night and weekend classes to earn her MBA, and eventually worked her way into a VP role at a medical device company. In pursuit of advancing her career, she moved my sister and I across the world to England for 2 years. Now retired, my mom spends the majority of her time volunteering and inspiring others in need.

What was your first role and how did you get to where you are today?

I started out in an entry-level sales role. At that time we were market-specific, selling to all verticals. The goal was to advance to larger cities to leverage our campaigns against larger subscriber bases. I began selling to Colombia, MO and progressively tackled larger and larger markets. I moved to Phoenix to work remotely, and serendipitously, Groupon created the Scottsdale office. I was asked to come in and apply for a management role. Eventually, I was promoted to a Business Development Manager / Divisional Sales Manager. After a few years, I was promoted again into my current role as the Regional Sales Director and Site Director of the Scottsdale office.

Have you won any awards?

I have been fortunate enough to win a Groupon Green Award for Respect, Integrity, and Inclusion. I have also been a part of the Presidents Club as a Sales Rep, a Divisional Sales Manager (DSM) and as a Regional Sales Director (RSD).

Where were you before you joined Groupon?

Before I joined Groupon I was working in Sales for the Milwaukee Bucks. One of my colleagues left for Groupon and told me I needed to apply because I would absolutely love it. She was right!

If you could do another job for just one day, what would it be and why?

I would be the General Manager for the Chicago Bears so I could sign myself to a multi-year deal! =)

Are you involved in any Groupon groups?

I have always enjoyed volunteering. We have an amazing group of Sales Reps in the Scottsdale office who spend a ton of time finding, organizing and facilitating different ways for us to volunteer. Recently, we volunteered with the boys and girls club of Tempe. It was incredibly rewarding to spend time with the youth of our community.

Your role probably exists at other companies, so what is it about Groupon that keeps you excited to come to work every day?

By this point it’s probably going to seem a bit redundant (but it’s true!), the thing that makes me most excited to come back to work each day are the people. This role at another company would not be anywhere near the same. At Groupon, I have the privilege to look up to great leadership, who I am constantly learning from. I’m surrounded by IMHO, the greatest group of managers ever assembled. Not to mention working with the most hardworking and talented team of Sales Reps.

What advice do you have for someone interested in joining Groupon?

If you’re looking for that place where you can own your career, and where hard work is truly rewarded— look no further!

What makes Groupon such a special place to work? All of the people you'll meet here!

Ever enjoyed an Ugly Sweater Bar Crawl Groupon? You have Emily, Business Development Rep and pug aficionado, to thank.

Forming authentic connections with local business owners is what keeps Kalli feeling warm and fuzzy inside. But you’ve been warned: one of the biggest hit songs from 1999 will be in your head all day after reading her story.

No stranger to all things remote, Sarah shares her experience working, training and team building...all over Zoom!